This Chori Pollo recipe is a delicious baked chicken chorizo that has all your favorite Tex-Mex flavors in one dish. Chicken breasts bake in the oven surrounded by a sauce of pork chorizo, cream cheese, and green chilis. This is the best chorizo recipe I have ever made at home and a great low-carb or keto dinner idea!

Why I Love This Chicken Chorizo Recipe

When I was in Dallas last month, I made a complete pig of myself when I ate at Pappasitos. That restaurant is reason enough to move to Texas. I couldn’t stop eating 🙂 Well, that was 35 days ago and I have been on a rampage for some good Tex-Mex ever since. We had a new Mexican restaurant open last week in our town, so I got all excited. My excitement was quickly replaced with disdain. Bleh…..

As a result, I became a woman on a mission. I needed to come up with a recipe to fill this Tex-Mex/Pappsitos craving, or I was going to die. Yes, die. Recipe inspiration finally struck at Wal-Mart as I stood in front of the refrigerated Latin food section. I am not one to brag, but HOLY COW!!!  I am a genius!  Really, just give this Chori Pollo recipe a try and you will want to nominate me to the Nobel committee. Genius, I tell you!

My Chori Pollo creation took boring old chicken breasts and turned them into flavor-packed perfection. This chicken chorizo recipe creates the most amazing pan sauce which is heaven when you serve it over some rice. Then if you are lucky enough to have leftovers, take it to the next level and slap the chicken inside a tortilla topped with some guacamole, fresh salsa, lettuce, and a squeeze of lime juice. Chori pollo tacos for the win! Really….you are going to want to have that Nobel committee’s phone number handy.

What is Chori Pollo

In English, chori pollo translates to chorizo chicken. There are many recipe variations but the main two ingredients are chicken and pork chorizo sausage, which includes a mixture of strong Mexican spices. In chori pollo, the chicken and spicy sausage are cooked together, giving the bland chicken a lot of flavor it wouldn’t have on its own. It can be made with either chicken breast or thigh meat.

While the seasonings and sauce ingredients can vary from recipe to recipe, this chori pollo recipe creates a gorgeous, creamy pan sauce as it bakes. Serve it just like it is, or over some rice with a generous drizzle of that sauce.

How to Make Chori Pollo

Oftentimes, you’ll prepare chori pollo in one pan on the stove. For this recipe, you’ll cook the chorizo and sauce on the stove, then finish the dish in the oven. I love cooking like this because it allows me to walk away from a dish as it cooks.

Can I use regular pork sausage instead of chorizo?

Yes, you can use regular pork sausage in this recipe and it will be completely delicious. However, it will not be chori pollo. You have to use chorizo sausage for that authentic-tasting dish in the end. Most grocery stores carry a few different varieties of chorizo in their Latin section of the refrigerated foods. And if not, don’t hesitate to ask your grocery store manager if they can order you some!

What can I use instead of cotija cheese?

Cotija cheese is made from cow’s milk and is often called the parmesan cheese of Mexican food because it is just as salty as the classic Italian cheese. Most grocery stores have it in their Latin section of the refrigerated groceries so look there. If not, feel free to use fresh parmesan cheese instead…just not that fake stuff in the green cans, please!!

How to pronounce chori pollo?

Reading how to pronounce a phrase in another language is rarely helpful. Hearing it is the only way to go. So, here is a link to the pronunciation ==> How To Pronounce Chori Pollo. If that doesn’t help, just call it chicken chorizo instead and you’ll be good to go!

How many carbs are in chori pollo?

If you are eating a low-carb or keto diet, chori pollo is an amazing recipe because it only has 4 grams of carbohydrates in each serving. That includes one whole chicken breast and the creamy chorizo sauce as well. It’s a large serving of delicious protein for a very low carb count.

What is chori made of?

Chori is the word for chorizo sausage. Classic chorizo is made with pork, but you can also find it made with chicken, organ meat, or plant-based meat substitutes. As far as seasonings, that is dependent on where the chori is made. Generally, it is seasoned with garlic, smoked paprika, chilis, annatto seed, and either white wine or vinegar. All of these ingredients make for an amazing chicken chorizo recipe!

Can you freeze chori pollo?

Yes, chori pollo makes a great freezer meal. To do so, you’ll prepare the chorizo sauce from the recipe, then assemble the dish in a heavy-duty aluminum pan with a lid. Using these disposable pans frees up your good pans for whatever else you need them for. Do not bake the dish as directed in the recipe. Instead, cover with plastic wrap, then the foil lid. Mark the lid with directions for baking, the name of the recipe, and the date. To prepare the dish, let it thaw in the refrigerator for 2-3 days then follow the baking directions as listed in the recipe below.

How to store chori pollo

If you are lucky enough to have some leftover chori pollo, package up the chicken into airtight containers while the leftovers are still warm. Allowing the leftovers to cool before putting them in the fridge allows bacteria the chance to grow and no one wants potential food poisoning! Store your leftovers in the fridge for 3-5 days, or in the freezer for 3 months. Leftovers make great chori pollo tacos or burritos! In fact, this is one of those magic recipes that is actually more delicious on day two than it was on day one!

What to Serve with Chori Pollo

Honestly, just think of your favorite Mexican side dishes and you will be good to go! Listed below are my favorite recipes to serve with chori pollo:

Are You Part of the Tribe?

Our PRIVATE Facebook group is for anyone who is DONE with the stress of getting dinner on the table every night! We’ve got everything covered: planning, shopping, meal prep, cooking, and clean-up! Click here to join for free! 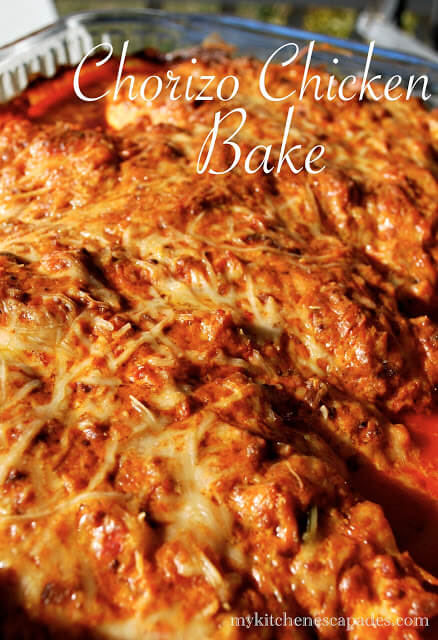