One month into the new school year and I am still going strong on fun, new lunch box ideas.  I actually packed PB&J yesterday for my kids and two of them returned them uneaten.  I think I found the downside of packing a delicious variety of lunches  everyday:  higher expectations!

They should know me better than that.  I totally love getting into something new, only to later fall off the wagon once it become difficult or I am too busy with other parts of life.  I’m all alone in this character trait, right? 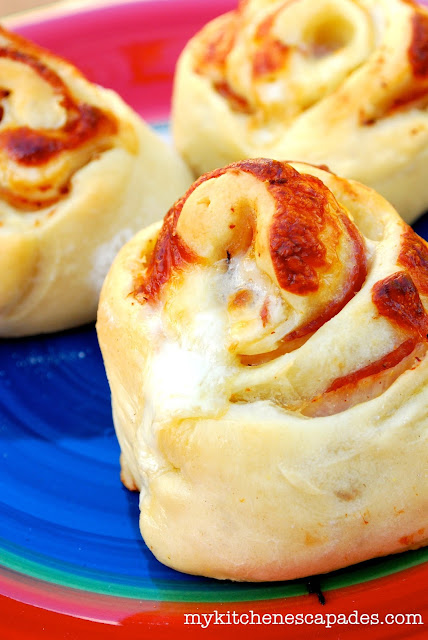 These actually served double duty as far as meals go.  I made a double batch and served one pan hot for dinner then wrapped up the second pan for lunches.  They were massively popular and we actually had to break into the lunch pan before dinner was completed.  So instead of enough for two school lunches, I only had enough for one but it is all good.

My kids couldn’t quite grasp what was sitting before them on their plate, so I explained that they were kind of like cinnamon rolls, but with lunch meat and cheese.  The mere mention of cinnamon rolls had them hooked without a single taste.
This recipe is completely flexible so don’t be afraid to mix it up.  Do you like ham instead of turkey?  Go for it!  Rather have swiss cheese instead of provolone?  Help yourself!  Love pesto but hate mayo?  Don’t let me tell you what to do!  My kids don’t listen to me, so don’t feel like you need to break the pattern by being strictly obedient.
Print 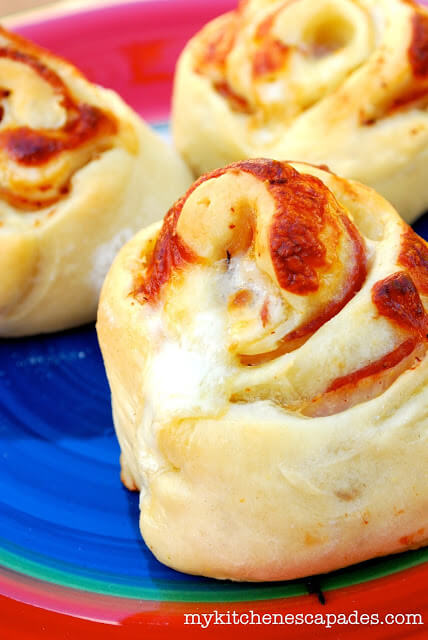 1.  Preheat oven to 425 degree.  Roll out pizza dough to a roughly 12″ x 18″ rectangle on a lightly floured surface.  Spread on the desired spreads of mayonnaise, mustard and/or pesto.  Layer the lunch meats and cheese evenly over the top.
2.  Starting on the 18″ side, roll up the rectangle into a log and pinch the seam closed to seal.  Cut into 12 even pieces with a serrated knife and place on a lightly greased cookie sheet.  Cover and let rise until a bit puffy, about 20 minutes. Bake for 20-25 minutes until the rolls are lightly brown.  Eat hot or allow to cool before packing them for lunches.