I want all the best recipes delivered right to my inbox

Jump to Recipe·Print Recipe
This week, I stepped away from the anonymity of my computer while My Kitchen Escapades led a food-based leadership training event in Minneapolis.  Please, wipe that smirk off your face.  Even though you and I have been together for over 5 years, I have a few skills up my sleeve you don’t know about.
I loved working with these 15 amazing guys who left me speechless at their ability to menu plan, budget, shop, prepare, cook and serve two main dishes, three sides and two desserts.  Going into this, I had secretly planned to hit a nice restaurant after the event was over because, come on….I was going to need some back up, unless of course, I died first of salmonella. 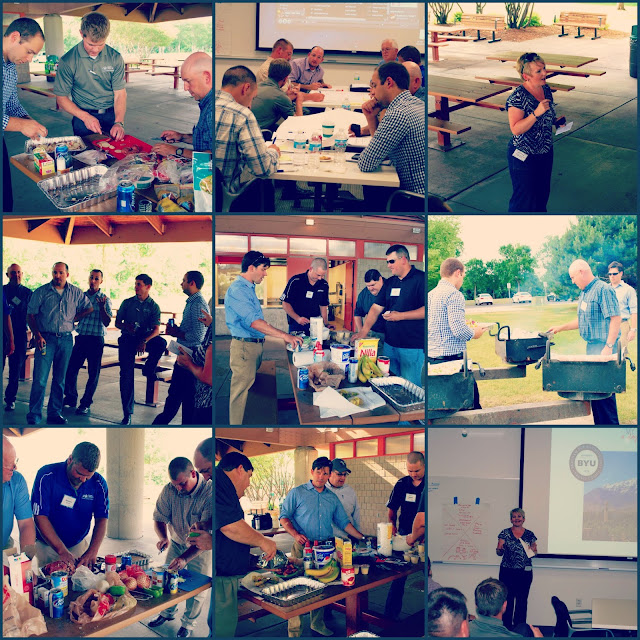 We feasted together on a ton of amazing food that night, however I have been sworn to secrecy about the culinary swag of these 15 men.  “No telling the wife” were my direct orders!  No worries guys because all this gushing and pictorial proof is just between you and me. 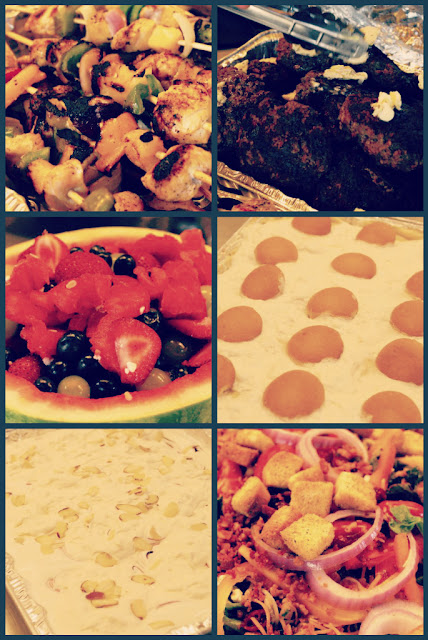 The whole leadership event was set up as a competition for a valuable Grand Prize.  A bit of disappointment was definitely on the faces of the winning team when I told them what they had won:   their recipe being featured here on MKE.  I’m sure they were expecting something more along the lines of a few extra cases of beer to take back to the hotel.  Isn’t this so much better?  (The proper response is, “Yes, Carole.  This is the perfect Grand Prize and was worth all that work!”) 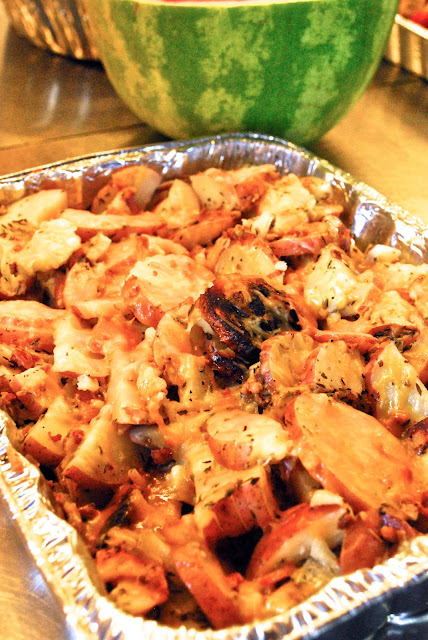 I had a hard time choosing which of the 7 dishes was my favorite.  Each team had one dish that stood out from the others but these rock star roasted red potatoes were loaded with garlic, cheese, bacon, thyme and butter.  That combination is pretty hard to beat for this mid-western girl.
I know my readers like very specific measurements when it comes to my recipes, but this whole adventure was a fly-by-the-seat-of-your-pants kind of activity.  All amounts are my best estimation of what was used.  Also, the pans were cooked on a stove top but they can be roasted in an oven or on a grill as well!
Print
Scale

1.  Combine all the ingredients, except for the cheese, in a large baking dish.  Cover with foil and roast over a hot grill or in a 450 degree oven until the potatoes are fork tender, stirring about half way through the process.  It will take between 30-45 minutes depending on the thickness of your potatoes and the size of your dish.
2.  Remove the foil and sprinkle the top of the potatoes with a generous amount of shredded cheddar cheese.  Return to the heat for about 5-7 more minutes until the cheese melt
Previous Post: « SmOREOS
Next Post: Mango Strawberry Daiquiri Pops » Hey there my friend! I'm Carole Jones, a momma to 6 crazy kiddos and honestly, I'm just trying to get my kids to eat something that isn't chicken nuggets and french fries. Learn More → I Want Free Recipes Right to My Inbox!