Discover the best Homemade Cinnamon Rolls recipe you will ever have! The secret ingredient in the brioche dough is potato flakes, making it soft and tender not only right after baking them, but for days afterward as well. You’ll never look for another cinnamon roll recipe again.

What I Love About Homemade Cinnamon Rolls

It is our annual holiday tradition to have homemade cinnamon rolls for Christmas morning breakfast. I’ve tried to get my kids on board with some different baked goods for breakfast like my favorite Lemon Coffee Cake but the kids keep coming back to cinnamon rolls. But since it is Christmas morning, we also have our favorite Sausage and Egg Casserole as well.

What I do love about both of our Christmas morning recipes is that I can make them both ahead of time, then warm them up after the gifts are all opened. I refuse to be the Mom who spends all Christmas day in the kitchen. In fact, I don’t do any cooking on Christmas day at all. We just eat all the leftovers from our big Christmas Eve party instead.

If you’ve been part of the MKE community long enough, you know I’ve published quite a few recipes for cinnamon rolls. All of them are delicious, but this one might be as close to perfect as I will ever get as I test and improve recipes. When I was making my favorite Amish Potato Rolls a few weeks ago, I had the realization that the dough would make the most perfect cinnamon rolls. And my friend, believe me when I tell you I was SOOO right! The potato in the brioche dough creates homemade cinnamon rolls with some heft, yet so tender. My recipe testing has officially ended for cinnamon rolls.

Like all amazing recipes, this cinnamon rolls recipe includes all the best ingredients so they are super flavorful and have the perfect texture. Quality ingredients lead to the best-tasting end result.

How to Make Homemade Cinnamon Rolls

If you can make a simple yeast dough, you can make homemade cinnamon rolls. Don’t be intimidated by the “fancy” look of the rolled up dough. It is simple to create.

How to Make Homemade Cinnamon Rolls

What is the best flour for cinnamon rolls?

The best flour for homemade cinnamon rolls is all-purpose flour. While other bread recipes need a high gluten flour for that great chew and crusty outside, cinnamon rolls need less gluten for a tender crumb and soft texture. Some recipes use cake flour but that isn’t a hearty enough flour for cinnamon rolls.

How do you keep homemade cinnamon rolls soft?

The key to soft homemade cinnamon rolls is three parts. First, be sure to use all-purpose flour, not bread flour. Second, carefully measure both the liquids and the flour. If you have too dry of a brioche dough, your cinnamon rolls will also be dry. Use either a scale to measure the flour, or a spoon to gently scoop the flour into your measuring cup.

Why does this cinnamon roll recipe use potato flakes?

Can I make this recipe ahead of time?

Yes, you can make these homemade cinnamon rolls ahead of time and you have quite a few options. For overnight cinnamon rolls, reduce the yeast in half and make the recipe up to the point they go into the pan. Once you hit that step, cover them tightly with plastic wrap and put them in the fridge for up to 8 hours. In the morning, bake them as instructed.

Next, you can bake them the day ahead and cover them tightly with plastic wrap once they cool down completely. To reheat the rolls, do so individually in the microwave for about 15-30 seconds. The potato in the dough keeps these rolls super fresh for a couple of days after they are baked.

Lastly, you can bake the pan of cinnamon rolls as instructed but pull them out 5 minutes early. Do not frost them. Once they cool down completely, cover them tightly first in plastic wrap, then aluminum foil. Freeze for up to 3 months. To serve, let them come to room temperature on the counter, remove the covering, and bake for 5 to 10 minutes and frost.

How to store cinnamon rolls

The best way to store homemade cinnamon rolls so they don’t dry out is to put them in an airtight container. You can then reheat them individually in the microwave for 15-30 seconds until warm.

Can I freeze homemade cinnamon rolls?

Yes, you can par-bake the homemade cinnamon rolls and then freeze them. Bake the pan of cinnamon rolls as instructed in a heavy-duty aluminum pan but pull them out 5 minutes early. Do not frost them. Once they cool down completely, first cover them in plastic wrap, then aluminum foil. Freeze for up to 3 months. To serve, bring the cinnamon rolls to room temperature, remove the coverings, bake for 5 -10 minutes, and frost.

If this recipe for homemade cinnamon rolls was exactly what you love about breakfast, you’ll love each and every one of these recipes as well! Grab them now so you don’t miss out. 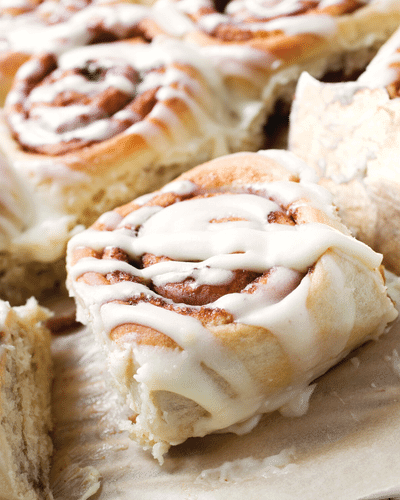